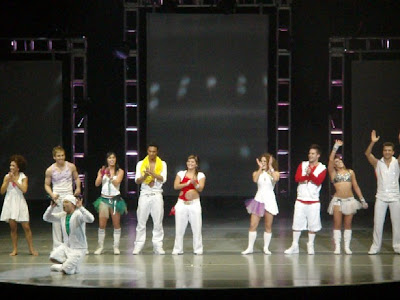 We had the best seats, front and center, for the show and it was two and a half hours of awesome. The top ten dancers were there along with a few guests like Hok, Anya, Jesus and Shauna. The show opened with a video of Nigel Lythgoe welcoming us and reviewing the best and worst of the tryouts. The top ten came out to do their opening routine and the audience went wild. They are even better in person than they were on TV. They performed most of my favorite routines including Jamie and Hok's Hummingbird and Flower routine, Pasha and Lauren's Fuego Hip Hop, and of course Lacey and Neil performing Mia's comtemporary routine honoring her late father. Another favorite of mine was the Lion King performance with the entire group. There were also some new routines written just for the show. We got to see Pasha (who is from NJ) do a beautiful ballroom routine with Anya. Each performer also got to do their solos and we were treated to their farewell videos once again. Each performer got a chance to come out and introduce the acts adding little background stories and jokes about the cast and show - Dominik was my favorite. During the mid-show break we were entertained with trivia videos about each dancer, do you know who eats a pickel with every meal and likes to drink the pickel juice? If you guessed Pasha, you were right. The show ended on a high with You Can't Stop The Beat from Hairspray. It kept us humming and smiling all of the way out to our cars. Did I mention all of the great tour merchandise? Pricey but what the heck, who can resist the tour t-shirt with all of their photos and those great dance pants with So You Can Think You Can Dance on the backside.........can't wait till next season!
Posted by Pepper at 5:00 PM No comments: